For my game this Thursday I am working on producing a view of the land inside the tower.

As I said previously the geometry is a bit tricky. Each of the crosses are one mile wide and tall (for scale). This is very much a work in progress.
No comments: Links
Labels: Author's Game, Fluff/Inspiration, Game Design

had a thought the other day about creating a random table that then had modifiers on pretty much every entry that would push the average up or down buy a given amount. So, if the table was a d10 each entry would have a positive modifier that would push the next roll upwards toward twenty, and the high numbers would have modifiers that would push the roll downward toward zero.
The effect that I was trying to go for was one of ebb and flow of history. If you are in a state of war, more war is a likely out come of the next roll. In a straight d10 table, war would normally happen every ten years. Where as, a more natural feeling table would have periods of conflict followed by periods of peace.
I will need to do some thinking on this subject.
No comments: Links
Labels: design

Features of the Tower

The titans who chartered the ritual for the tower realized that some fraction of their mortal followers would be coming with them during their ascension, and they made accommodations for them in the design.

Food makers - About every half mile along the ramp exist stations that will produce a pudding like food for any who place a bowl or similar container in the nisch. To creatures associated with the ramp's titan, the food will taste like heaven, to everyone else, it tastes like soap or worse. The food stuff has the same coloration as the ramp, but is otherwise nutritious. Unfortunately, these facilities were often left on and are responsible for producing much of the dirt in the tower.

Fountains - Adjacent to the food alcoves are the water fountains, these ever flowing trickles of water.

Facilities - A series of simple toilets, in banks of several hundred are nested in a room within the walls of the tower. Vastly wide entrances allow for hundreds if not thousands of medium creatures to enter the chamber at one end, take care of business in private stalls and exit out of the other end of the chamber.

Sleeping Chambers - Lined with enough triple bunk beds to house a several thousand were fabricated into recessed chambers in the tower walls. However, given that the titans never stopped during their ascension, the sleeping chambers was a major cause of those that fell behind.

Tombs - It was foretold that not all of the servitors would survive the ascension process, and as a result great chambers, lined with stone niches were readied for use as the need arose. In the lower extents of the the tower these were barely used, but as you ascend, more and more of the niches become occupied. in the present, the tombs are a major source of mettle and magic, as the followers took to the tower carrying all of their worldly possessions.

Windows - At regular intervals around the tower are placed great quarter mile high stained glass window recounting the achievements of the titans and their followers. Most of these are buried by dirt over or obscured by water, only a few are accessible to mortals.

Secrets - Within the features hide secret entrances into the fourth path of ascension within the tower. Colloquy know as the "Secret Stairs" this maze of interconnecting secret passages generally leads upward but it is, frequently, a rather torturous route.

The Top - At the top of the tower exists the gate, a mile wide glowing orb with insubstantial dancing glass like fragments of reality floating about it. It is held in place, relative to the tower walls by three colossal, arcane brackets; A series of three ramps work their way across the five mile gap to come within a few feet of the gate.

The Tower Floor - A ten mile across oval  of jumbled terrain: it ranges from high mountains tip side to a vast lake Lean Side with planes and forest in between.
No comments: Links
Labels: Fantisy, Fluff/Inspiration, Game Design

Each of the ramps rise at the moderately steep angle of 15 degrees, ascending 48 miles up over its 190 mile length. The three ramps each complete 6 loops of 30 miles as they rise to the top.

The tower is tilting at a 37 degree angle and this has created a rather different, perspective on the world. 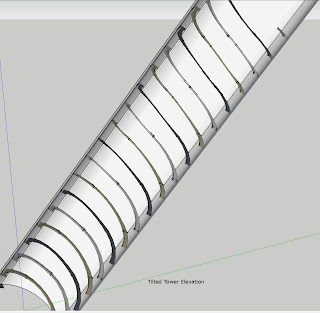 Lean Side -  where the ramp forms a cup between its self and the tower walls, here dirt, and detris collect to form level land.  These zones, all eighteen of them form the primary location for civilization in the tower, as it has the most arable land and water. A river runs down the side of the tower forming waterfalls as it runs over the lips of the ramp.

Up Side - Is the next region  Lean Side moving up the spiral ramp we have the hill side. The bare ramp would have an angle of 52 degrees, rising 9.6 miles over a seven and a half mile course. Fournatly, dirt on the ramp slides downward forming great crubmly bluffs, alowing them to be scalled with difficulty and some risk, land slides are not unusal in this area.

Tip Side - oposite of the tilt side, the ramp is covered with very slow moving dirt flows and some wildly cantered young trees. Prime grazing land for the most sure footed of creatures. The bare, or vine covered walls of the tower often expose some of the Other features of the tower.

Down Side - the bare ramp would have a 17 degree Downward angle. descending 2.3 miles over the seven and a half miles. forests start with the youngest of trees at the edge of tip side and get progressively more mature as they move toward tilt side.

Lean Side Wall -  for the adventurious climber it is possible to ascend the Lean side wall, as there are a large number of trees, shrubs and such growing on it. In someways it is genteler than the upside ramp. Notable features include a river with grand water falls from the higher ramp.

Central Lighting - In most places the ten mile long, half mile wide light crystals have remained in place, taking on the same 37 degree tilt as the tower. A crystal emits noon day sun, Evening light and a star filled night sky from each of it's three sides. Most rotate, with a period of one day.

Tomorrow we will look at some of the general features of the tower.
2 comments: Links
Labels: Fantisy, Fluff/Inspiration, Game Design

Three Paths of the Titans

A bit of oral history relating to the Tilted Tower.
Three of the titans of creation were paroled by the gods for their assistance in the destruction of the other titans. In exchange, they were granted the privage to leave this world for another by way of a fracture in reality, a gate, some fifty miles above the lands.
Calling upon each of their cohorts, each a million souls strong, they started a grand ritual that took three years to complete, growing the tower inch by inch toward the gate.
Upon it completion, the cohort dispersed, some following the titians up each of their paths the rest returned to their homelands to face persecution at the hands of the fanatic followers of the gods.
The Titan of Light ascended a silvery path and walked in the noon day sun, followed by diva, dragon born and some humans.
The Titan of Night took the obsidian path, walking under a night sky, with teiflings, orc and human sycophants.
The Titan of Twilight took the marble path, and walked under a sky forever in dusk or dawn.
A fourth figure, diminished by the loss in the primal war, a mere fragment of the Most hansom of Evils, stalked through a hidden, twisting maze in the walls of the tower, a hand full of dead servitors in tow.

Next we will examine features of the tower.
No comments: Links
Labels: Fluff/Inspiration

Built by the followers of the three paroled titans of creation to escape to another realm after the Primal War. The Tilted tower is fifty miles from its base to its apex, and ten miles across. The drift of the gateway and the lands has, over the eons, pulled the tower from its vertical position to it's current thirty seven degree tilt. 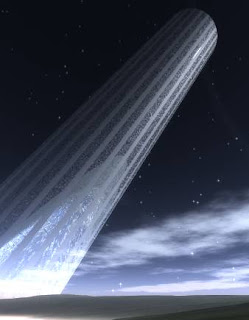 It looms so large over the lands that it stays illuminated for a full two hours both before dawn and after dusk.
Very few have ever scaled the uplift mountains around its base to enter any of the three half mile across entrances, fewer still have returned to tell tails of the cites and civilizations that dwell within.
No comments: Links
Labels: Campaigne setting, Fluff/Inspiration, game inspiration

(found at IO9)
There is a very impressive cross sectional map of the former Walled City of Kowloon (demolished in 1993).
The map notations are not in English but it is still worth a good long look.
See it here
(Now someone should do a Sharn  cross section in a similar style)
No comments: Links
Labels: City, Fluff/Inspiration, Mapping

What I am reading

There are 8 intresting articles that I am currently digesting from a number of different sources:

Now to throw them all into a blender and see what comes out....

What Gets Me Started

The problem that I have had with maintaining this blog as not be a lack of ideas, but getting started. About 80 days ago I discovered 750 words. Its a simple site with a simple goal: to get you to write, every day, at least 750 words. As it is not a blog and nothing is visible to anyone but you, all the writing that you do is for YOU. It is supported by user contributions so it is "free".

Now, this alone would not have been enough to keep me going but then the sight adds monthly competitions (write every day for a month), and these silly little badges for making various goals and achievements: I am personally only 47 days from my phoenix and withing a couple ten thousand words of making my flock of birds. In some cases, failing to make your words for the day will cause you to loose a badge: I have found this loss aversion to be very, very motivating.

Latter in the day, once I have passed the quota, I will go back an expand upon or add additional ideas there. Or, if I am pressed, I will search past daily words for ideas or topics to write about.

Give it a try, come on, for the first three days, you have nothing to loose... however, once you make your Turkey badge... you are hooked (hopefully).
No comments: Links
Labels: blogging, Fluff/Inspiration

I found this little rant and was personally chastised for my, somewhat sporadic posting habits: the last post was on May 13, 2010. Alright, maybe Mr Porter was scolding some other people aside from just myself.
I have, however, taken this to heart and I will endeavor to maintain a at least every other day posting schedule with content that related, if tangentially,  to gaming.
The sad part is that the rant was posted more eleven days ago...
(sigh)